Member Musings features the reflections and thoughts of an NPC member.

The other day, I planned to wear a blue necklace and matching earrings. Sadly, one of the earrings was missing. It wasn’t an expensive piece of jewelry but I don’t like losing anything. Not only have I been obsessively looking all over for it, but I have also spent an inordinate amount of time thinking about where it could be. If I expended as much time thinking about how to achieve world peace, it would be a better use of my time.

Although that earring had little value, I recall one time that I could not find ANY of my few pieces of expensive jewelry. Now, this is embarrassing. I kept them in a fabric roll-up jewelry case in the bottom of a box of sanitary napkins under the sink in my bathroom. My thinking was that a male thief wouldn’t think of looking there. Right? One day I noticed that the box was gone. Frantically, I ran through the house searching the trash cans. Fortunately, I found it. A visiting family member had needed a sanitary napkin. When she used the last one in the box—not noticing what was under it—she threw the box away. Obviously, I now have a new place to hide the good stuff—a safety deposit box.

On a driving trip to New York a while back, we stopped at a restaurant in Hartford for lunch. After we left and were on the road for about an hour I noticed I was missing a 14K gold hoop earring that had come out of my ear. Four days later, on our way home, we stopped in the parking lot of that restaurant in Hartford and, believe it or not, I found my earring on the ground—only a tiny bit dented. Fifteen years later, I still wear those earrings. 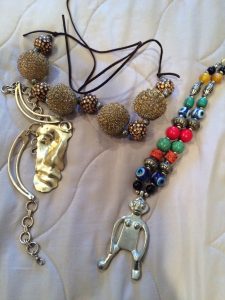 Just two years ago I was in Chicago at the Art Institute. My significant other bought me a lovely pair of earrings in the gift shop. You know things are not inexpensive in a museum store. I wore the earrings on the airplane home. When we landed, I had only one earring. I was devastated. You would think I was seriously ill. I retraced my steps on the airplane as well as I could. When we got home I contacted the airline and the airport with information about the missing earring and a picture of its mate. They didn’t even respond. I then found out the name of the artist who designed the earring from the museum store, wrote to her and asked if I could buy just one. She said “no.” That’s how far I will go for a missing earring, a practice that probably seems ridiculous to many people. I still have only the one earring.

It sounds as if I lose only earrings. That’s not the case. I lost a fire hydrant in the blizzard of 1978 in Massachusetts. Well, not exactly. My neighbor thought we should uncover the fire hydrant in front of our homes as a safety measure, but it was buried under many feet of snow. Several of us took shovels and punched holes in the snow, hoping to hear a clang. After lots of punches and no clangs, one of my neighbors suggested we pray to St. Anthony, who, she explained to us non-Catholics, is the saint of lost objects. So we joined her in prayer. The next thrust of a shovel resulted in a resounding clang! Honest!

As I have explained, I will do anything to find a lost earring. This morning I remembered the fire hydrant story and sheepishly said a prayer to St. Anthony. Then I looked in the jewelry drawer. There was the missing blue earring. It had fallen out of the plastic storage bag when I removed the necklace and dropped the bag into the open drawer!

Now I can go back to figuring out how to achieve world peace.