Press club board member Phil Beuth will receive the first ever Temple Shalom Social Justice Award at a very special program on Sunday, March 11 at 7PM at the Temple on Pine Ridge Road.

Phil, a retired television executive and Broadcasting Hall of Fame inductee, was the president of the “Good Morning America” television program. Phil was also an early advocate for AIDS awareness, producing the first program on AIDS on any national network. He has spent a good deal of his time since coming to Naples engaging in philanthropic endeavors. Phil is senior member of the Board of Trustees of the Guadalupe Center in Immokalee and one of the prime movers of its highly regarded Tutor Corps. Phil is also a member of the Press Club of Southwest Florida scholarship committee and has been instrumental in expanding the scope of the club’s endowments. With all of his largess locally, Phil has not forgotten his alma mater, Union College in Schenectady, New York. Thanks to his generosity, one of the student residences has been named Beuth House. 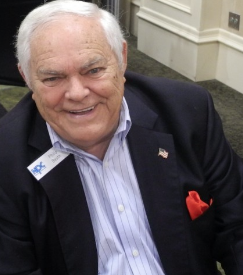 Press club members are invited to come and help celebrate Phil’s achievements. Phil will be honored during “We Are One: A Musical Celebration,” a program created exclusively for Temple Shalom by award-winning New York director Jamibeth Margolis. She will bring a professional New York cast for the show. The program pays tribute to peace and social justice featuring many well-known musical numbers interspersed by readings by locals, including Press Club member Carole Greene and Mayor Bill Barnett.

Students from the Guadalupe Center Tutor Corps as the guests of Temple Shalom will attend the program to share in the honor for Phil Beuth.

Sponsorship opportunities begin at $125 and a limited number of general admission tickets are available at $45. Wishes to the honoree may be placed in the Keepsake Journal, which will be distributed to all who attend.

← NPC Sponsors 4th Panel for FGCU Students
Your Board in Action →