Three panelists told the Press Club of Southwest Florida members and guests at the November 2 luncheon meeting at Tiburon Golf Club in North Naples about the aftermath of Hurricane Irma. They told us how the state of Florida, Collier County Emergency Services and FEMA were challenged by the H. Irma Category 3 storm that hit Florida on September 10 with wind reaching as much as 185 mph for 37 hours.

State Senator Kathleen Passidomo, R-Naples, said that projections show the state “will advance about $665 million for hurricane-related expenses. One-half of all Florida residents were without power and 2.6 million individuals have registered for FEMA help, more than all the previous hurricanes combined.” She added, “There are two aspects, the dollars and the people. The problem we have is that the revenue coming in had lessened, and we didn’t expect a storm of Irma’s magnitude. Sixty of Florida’s 67 counties were affected.” She pointed out that electricity and communications are the biggest problems, saying that more generators are needed, but if they were to be required on all public properties other items in the budget won’t be funded. “We need to create a better communications network with emails and phone numbers and have a better system of wellness checks, but how do we protect our citizens without having their information becoming part of the public record?” Passidomo asked. “People are coming to Florida from Puerto Rico, so the resources will have to be shared. Plus, the schools served as shelters, but they had a lot of damage that they now have to pay for, money that was to be used for education,” she explained. “First and foremost, I want to be sure that our citizens are protected.” 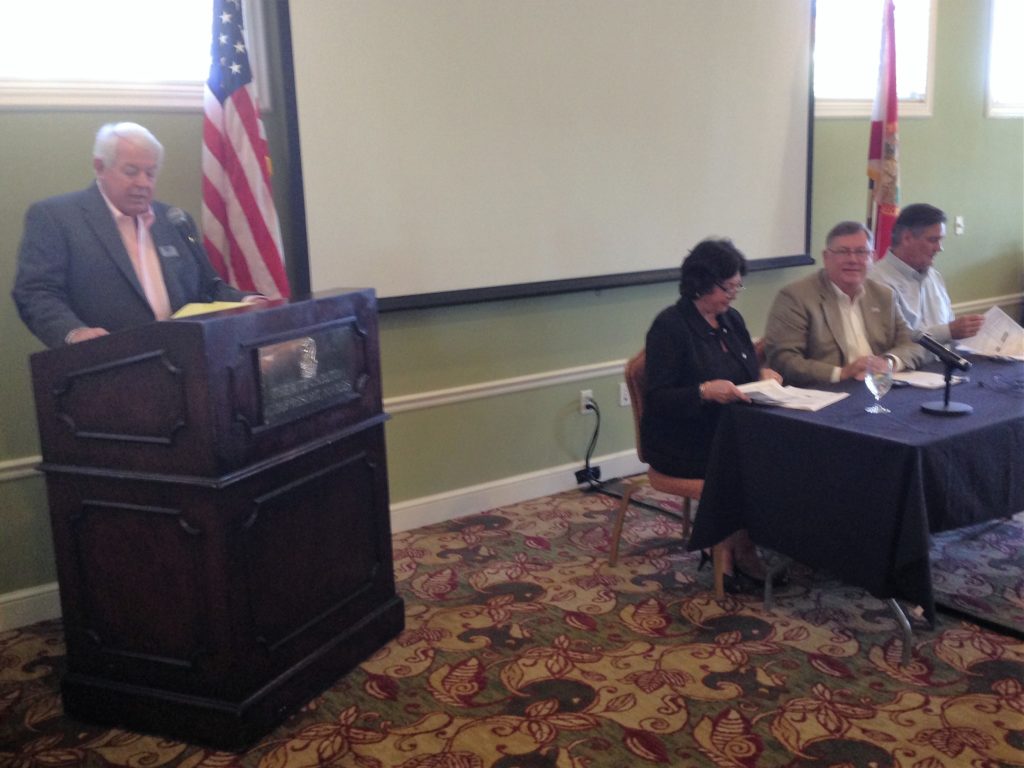 Dan Summers, director of the Collier County Bureau of Emergency Services, said that every Collier County employee is involved and second responders are back there, putting all the pieces back together. “Lots of things we did right,” said Summers, “and we welcome positive feedback on what needs to be done better. There were 17,000 people in shelters but there was no overall system of communication, and when people were turned away from a shelter they didn’t know where to go.

“The camaraderie of the community is amazing; we had great local support at all levels.” He reported that 53 external volunteer agencies showed up in Collier County to help, 140 pumping trucks were used to pull out gray water from the pumping stations, and 80,000 gallons of emergency fuel were brought into the state. “The Wind Code (upgraded after the 1992 H. Andrew storm) protected us,” Summers said. “The state and federal departments did a really good job, but the housing missions are a challenge; they are not going as fast as we’d like.” He explained that there were four major disasters at about the same time, with H. Harvey in Texas, H. Maria in Puerto Rico plus the wildfires in California.

Dolph Diemont, FEMA representative, said that he wanted to update the attendees on the recovery efforts. “Currently, 71,000 Collier County residents have registered for FEMA assistance, which is more than all the previous major hurricanes that hit Florida combined. About $52.5 million in federal assistance has been distributed in Collier County, to date.” Diemont acknowledged that the agency is spread thin because of the sheer magnitude of the three major hurricanes that hit and that 65,000 square miles in Florida are affected. “All the federal agencies in Florida became involved,” he said, “including Homeland Security. But our 1-800 FEMA emergency help line was overwhelmed. We increased our ability to handle more calls, but it came at a cost.” Diemont continued: “The emergency housing situation is long and complicated in Florida. We used all available resources. It does take time and it does take collaboration among federal, state and local agencies. We’ll continue to work through the challenges.” He added, “FEMA is committed to being here as long as it takes to get the job done!”

Q: Are there any preparedness records that leap out at you?
A: (Summers) People are so dependent on their wireless devices. People didn’t prepare by having AM/FM radios. A major Century Link network went down in the Golden Gate area, and we received 22,000 phone calls about when their cell phone coverage would be back on. When we went from analog to digital, we shot ourselves in the foot. We need to re-market that concept. We need to also re-massage the technologies. Plus, we think our Emergency Alerts were ignored and not broadcasted.

Q: Do we have a Cable Emergency Alert Channel in Collier County?
A: (Summers) Yes—Channel 98.

(Passidomo) But the problem is that all of Collier County was without power.

(Diemont) The recovery process is so dependent on the disaster system that’s already in place. Puerto Rico was hit much harder and the infrastructure was so much weaker, plus they didn’t have a strong disaster system in place. Collier County weathered the storm so much better.

(Summers) FEMA adjusted up to $2100/family into an apartment rather than an RV.

(Passidomo) Housing isn’t the only issue. We’re also getting assistance requests from growers and agriculture workers. Plus, getting food and affordable housing are both priorities.

Following the panel presentation, State Sen. Kathleen Passidomo and Dolph Diemont were presented with honorary Press Club of Southwest Florida memberships for one year. (Summers received his honorary NPC membership when he spoke at a previous NPC luncheon.)