ACLU’s David Goldstein Speaks about Civil Liberties, the War on the Media and News

“ACLU is the leading defender of personal rights given to all Americans under our Constitution’s Bill of Rights,” said David Goldstein, president of the Collier County Chapter of ACLU, affiliated with the National ACLU chapter. He spoke at the March 2, 2017 Press Club of Southwest Florida luncheon meeting at Tiburon Golf Club-Naples to approximately 40 attendees, talking about Americans’ civil liberties, and the current war on the media and news.

Goldstein said, “The 1st Amendment makes a powerful statement about the rights of Americans: ‘Congress shall make no law respecting an establishment of religion, or prohibiting the free exercise thereof; or abridging the freedom of speech, or of the press; or the right of the people peaceably to assemble, and to petition the Government for a redress of grievances.’

“I wasn’t an activist during the 60s,” he said, “but became one in my 60s.The right to protest, for example, is a core American value, and ACLU supplies cards with the right to protest information.” Goldstein said his ACLU chapter became involved with the city of Naples to help get a permit for a recent Women’s March. “We also deal with marijuana rights, gun rights, civil rights and religious freedom in the Collier County public schools,” he said, “and we were involved with a Barron Collier High School Choir performance in a local church.” 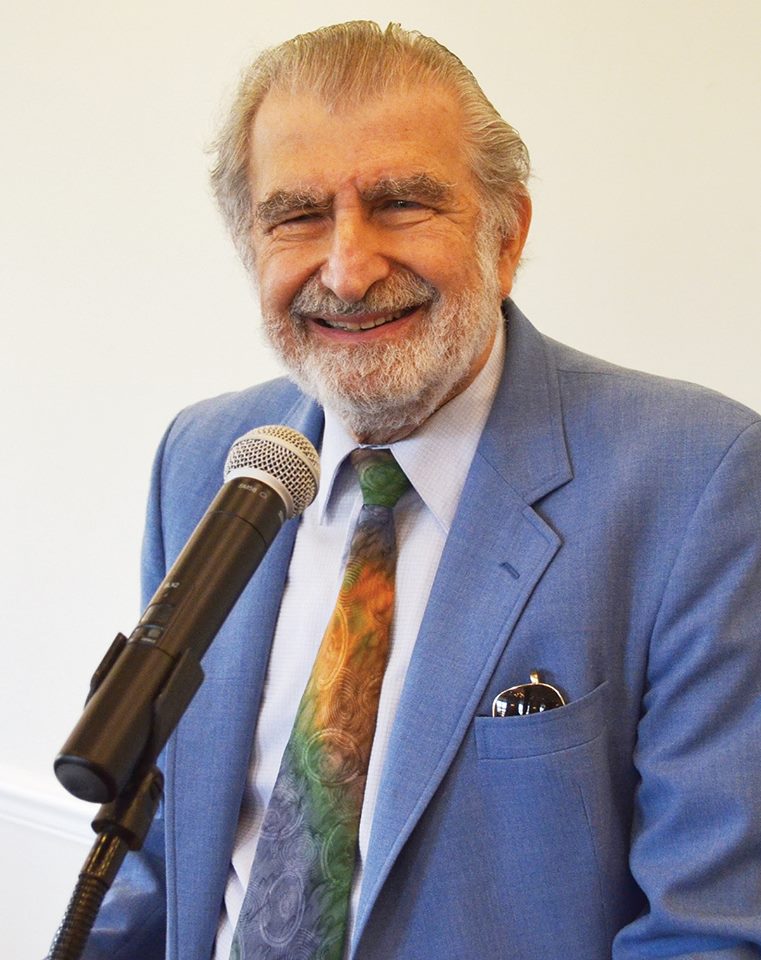 On the topic of the current war on media, Goldstein said, “When the President says the media is an enemy of the people, he is attacking the freedom of the press. President Trump is happy with the media as long as it’s on his side. He is concerned about leaks that are about him. Former President Obama also had a battle with the media and leaks.

“Recently a White House Press Conference barred several major newspapers from the press meeting; the New York Times, Washington Post and CNN were shut out. A Columbia University professor said that it was unconstitutional and a form of discrimination. Presidential news conferences have to be made available to all news people; otherwise it’s a 1st Amendment issue. The news media serves the people, first and foremost.”

“President Trump is also suggesting that libel law be changed to make it easier to sue the press, but there is no federal libel law; libel is handled at the state level,” said Goldstein.

On the topic of libel, Goldstein said, “If the press prints alternative facts as being true, that is a libel issue.”

During the Q&A time, one NPC member said, “Newspapers and magazines have done away with fact checkers and copy editors.” Goldstein agreed, saying, “The goal now is to get the news out as soon as possible.” Another attendee added, “Reporters now have the primary responsibility of accuracy.”

The question was asked, “How does a journalist get credentialed?” Goldstein said that it varies from agency to agency. A NPC member stated that the National Press Club credentials its membership, and no lobbyists are credentialed.

Another comment was that the Reagan White House was very open, other than with seating – which was assigned. Goldstein said, “It’s up to each organization what they will credential.”

A NPC member asked about states who set up protest laws. Goldstein reiterated that the protest right is constitutional. He said that ACLU’s goal is to avoid litigation.

The question was asked, “What about the next group who wants to stage a protest or march in Naples’ Cambier Park?” Goldstein said, “Hopefully, now that it has been pointed out that the restrictions are unconstitutional, the city of Naples will correct their problem.”

Another question asked, “Is the ACLU getting involved in the press rights?” Goldstein said that the Times, for example, is able to defend itself, so it’s not necessary for ACLU to get involved.

One member brought up that Stephen Colbert in his late night TV show has a vicious attack going on about the President, and it’s not true. Goldstein pointed out that Colbert is not a news person, he’s an entertainer.

When discussing the 2nd Amendment, Goldstein said there should be reasonable regulations to get a gun permit, and the ACLU agrees with that.

Another member brought up the topic of “fake news” and Goldstein said, “With respect to a public figure, there is a much higher standard; it must be done maliciously to be libel.”