Reflecting on the year just past, I think of two words: outreach and growth. The club has grown not only in membership—in December we welcomed our 150th dues-paying member—but also in the ways we influence the greater Naples community. If I listed everything our Press Club of Southwest Florida has done in 2014 that makes me proud, this letter would be too long. I’ve learned the hard way that today’s technology (140 characters or less, for Pete’s sake!) has shortened our attention span. Therefore, I’ll focus on the significant events and policies that have fostered our growth and outreach.

A quick glance at our program presenters will attest to our outreach. We kicked off the year by welcoming Mei Mei Chan, President of The News-Press in Fort Myers, as our presenter. In February Scott Campbell, from Physicians Regional Healthcare System, told us about the impact on the community from hospitals and physicians. We also awarded Phil Lewis, recently retired editor of Naples Daily News, a special prize named in his honor. That moment brought quite a few tears of pride and gratitude. Also in February, our members brought books for member Karen Clawson’s charity “K is for Kids.”

Our March program featured the new boys on the block at Naples Daily News: Publisher Bill Barker and Executive Editor Manny Garcia. They backed up their pledge to be community oriented by becoming sponsors of the Press Club of Southwest Florida.

Throughout the year, they provided complimentary advertising that brought members and guests to our luncheons. We are thrilled and honored by their support. We journalists stick together.

NPC reached out to the E.T. Brisson detachment of the Marine Corps League to co-host the annual “Honor the Free Press” luncheon in April. This year’s honoree was Naples’ own Peter Thomas, who delighted the audience with an intimate view of his exciting career. He then stunned the sold-out crowd by reciting from memory the poem he wrote about D-Day.

Our own VP/Programs Randall Kenneth Jones provided a hilarious, inspirational program for our April luncheon, when he delivered a “love letter” to Naples. Although he was a hard act to follow, we found someone up to the challenge for May: Peggy Post, director of The Emily Post Institute, and an etiquette maven as attested by her many books, some of which were available for purchase and autographing that day.

Although May closed out our “luncheon season,” it didn’t stop our community outreach. In July we invited the entire community to the Naples Depot Museum for cocktails, appetizers, and remembrances. This served to honor Jeff Lytle, who retired in June after 35 years at the Naples Daily News, 25 of them as editorial page editor. Close to 200 people jumped at the chance to show Jeff what his being “the conscience of the community” meant to them.

In September two seniors in the journalism program at Florida Gulf Coast University began a term as interns for NPC. Brooke Blythe and Nick Idler were in charge of receiving, editing and posting NPC member bios and photos onto the “members only” section of our website. We benefited from their work and so did they. Love a win-win! 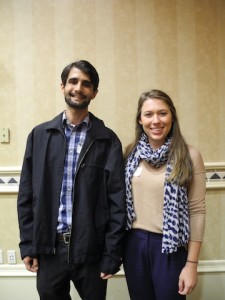 To open our 2014-15 season, at our October luncheon Allen Bartlett, Naples Daily News’ new editorial page editor, monitored a Q & A session with two candidates in the Nov. 4 election for Collier County School Board: Erika Donalds and Kathy Ryan. Later in October, The Naples Players, in conjunction with our club, presented an entertaining “Little Shop of Guys & Dolls” review starring our own Randall Kenneth Jones plus John and Mary Anne McKerrow. At our November luncheon, John McKerrow was back in the spotlight as he, along with his wife and some other stellar actors, performed a few scenes from productions of Shakespeare in Paradise, another theatre organization embraced by our club’s outreach. We closed out 2014 in a magical way, with a “back by popular demand” program by Keith Raygor, “The Musical Mindreader.” Don’t ask: we have no idea how he does it. 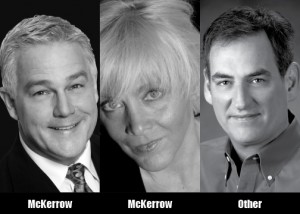 The second watchword for 2014, growth, I believe goes hand-in-hand with outreach. Our exciting program presentations brought in members, who blabbed about how much they enjoyed our luncheons. That attracted guests, who knew a good thing when they saw it and applied for membership. With such rapid growth—adding close to one-third of our membership in just one year—came some growing pains.

We attempted to sponsor a journalism contest that offered the rarity of a cash prize for first, second and third places. Regrettably, Florida journalists didn’t step forward in sufficient number to warrant holding the competition. We’ll retrench, redirect our efforts and try again. Many thanks to the hard work Gina Edwards and her committee put into this. We have confidence it will eventually work—journalists won’t ignore the enticement of cash prizes for long.

We also tried to support a sub-group for NPC members who have written books, both fiction and non-fiction. It held one meeting. If any member wants to pursue this, ask me for the list of those who attended that meeting and try again.

We’ve established several successful policies. To name one, at all luncheons we will arrange a table for our members with books to display, sell and autograph. All you have to do is ask when you reserve for the lunch. Speaking of our reservations policy, we have tweaked it throughout the year to make it easier for the check-in team as well as for the Hilton. Our new treasurer has some ideas for further streamlining—providing even greater convenience. Stay tuned.

No club, even one as marvelous as NPC, runs without a great deal of hard work by those in leadership positions. I figuratively shout out a thank you to my 2014 Board of Governors:

I couldn’t have done it without you. Seriously.

A few board members did a shuffle, taking on different positions, and we welcomed two new victims—uh—leaders after members at the December annual meeting voted for all the slated nominees.

Len Egdish takes over for Connie as treasurer, and Marisa Cleveland bounces into a spot as Governor-at-Large.

We all look forward to 2015 and your help to continue to make this THE BEST CLUB IN NAPLES.