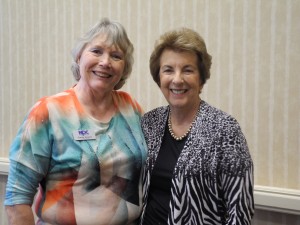 Thirty hours. That is how long it takes to get from RSW Airport, Ft. Myers, FL, to Kabul, Afghanistan. Mimi Gregory, past president of the Naples Council of World Affairs, began her May 23 NPC luncheon talk by describing her recent one-week trip to Afghanistan. She was invited to be part of an eight-person delegation to meet and speak with various Afghanistan leaders about the current situation there. Gregory said that the leaders they met had international academic backgrounds and spoke English.

Interesting points: Sesame Street is a huge hit there. Virtually all of the people—even in the most remote tribal areas—have cell phones with low-cost service.  Al Qaida translates as “the base” and Taliban translates as “Islamic scholar.”  Today, Kabul is desolate and terrible, Gregory said, except for the grand Gardens of Babur, originally built in the 1500s. In the last few years, the number of students in school has increased from 2,000, all male, to 9,000, with 40-percent female.

Her primary message to our group was: “PROGRESS IS BEING MADE and WE MUST STAY THE COURSE!” Great fear exists among the people of Afghanistan that the country will collapse without international help, and the monetary system there is not stable. While she was in Kabul, two more banks closed. Most of the Afghan recruits are illiterate, and going AWOL is common because they are NOT getting paid. The USA is paying some Afghan troops with cash—the best way to do it.

Gregory said that we don’t understand the Afghanistan customs, and that is our fault. For example, Americans burned Korans because of handwritten notes in the margins interpreted as “hidden messages.” If we had buried them or put them in water instead of burning them, the issue would have been much, much less intense.

She mentioned that the media people they met were mostly women, mostly representing radio stations. Because electricity generation is inadequate, television transmission is scarce. She pointed out that Afghanistan women are becoming bolder in makeup and dress, but they are still cautious. There is still a great need to educate girls and women. Pakistan madrassas provide the current materials in the schools—and they preach fundamentalist Islam.

Afghanistan is one of the least-developed countries in the world and was further decimated by the last 30 years of conflict. They have huge mineral resources, but they are way behind in getting them out of the ground. Large copper contracts have been awarded to China. Water management is a very large problem, along with sanitation and the lucrative opium trade, run by organized crime groups throughout the world. Afghanistan farmers produce 90 percent of the world’s poppy crop needed for opium, but—a positive development—they are able to get low-interest loans to grow other crops, instead. Gregory said that growing pomegranates can create a better financial boost (yielding $10,000/crop) instead of poppies (yielding $8,000/crop). Slowly, more farmers are turning to crops like pomegranates.

Gregory pointed out that the Taliban are now in exile in Pakistan, but they want to return to traditional homes and families in Afghanistan. In order to return, 60,000 Taliban have signed agreements with Afghanistan to “do no harm” and thus have been given a 25-year “pass” to repatriate to their former villages and live a normal life.  Gregory feels that the Taliban should not be allowed to return. Male students in Afghanistan worry about the return of the Taliban because they fear they might be conscripted into service.

In closing, Gregory said that the ISAF mission to train the Afghan Army is the key. Pakistan is a sanctuary for the Taliban and Al Qaida—so why does the USA give them money?  She repeated a Taliban/Al Qaida phrase: “You have the watches, but we have the time.” We need to support the democratic process in Afghanistan; we cannot depend on other countries such as Saudi Arabia.

Progress is being made, and the USA must “STAY THE COURSE!”

← Your Board in Action
Television Today →