The pandemic couldn’t keep the Press Club of Southwest Florida from holding one of its annual, popular summer “Media Mixers.” Because it was necessary to hold the mixer via Zoom, event organizer Jill Jaffe suggested a format that would allow members to mingle a bit and also learn from several of our experienced “media superstars,” including two retired and one working journalist. The hope was to offer insights to all members and guests, but in particular to our Press Club’s journalism scholarship students and young working journalists. What we learned is the typical “media mixer” time, 5:30 p.m. happy hour, does not work well for those audiences. As a result, the next event will likely be scheduled later in the evening to encourage working journalists, especially young reporters, anchors and producers in broadcast, to join us. 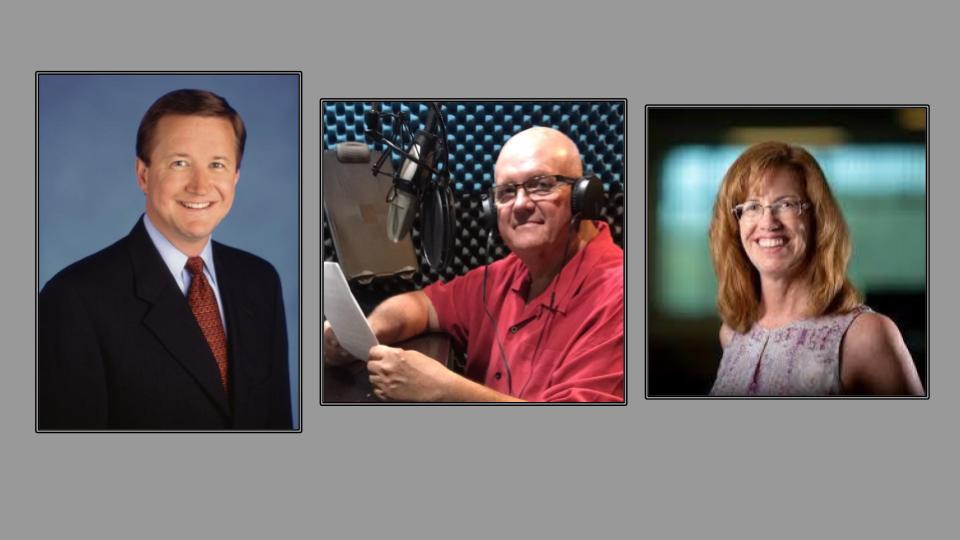 In his introduction, Press Club Board Vice President Bob Orr described his 43-year career as half with local CBS networks including Columbus, Ohio (where he met George Lehner) and the last portion with CBS News, primarily in the Washington, DC, Bureau. Press Club Board Member George Lehner knew he wanted to be a journalist early in his life. He worked in radio hard news, seeking out and breaking news stories. He was driven to be the first out with a breaking story. He later became a reporter, then editor, for sports news and covered many breaking stories related to Ohio State University and other local sports. New to the Press Club, Laura Greanias grew up in the Twin Cities (Minnesota) but spent more than 25 years in L.A. She was 8 or 9 years old when she knew she wanted to be a journalist. She met her husband, Tom Greanias, in J School—Medill School of Journalism at Northwestern University (Evanston, Ill.), which frequently ranks as the top journalism school in the nation. They became members of the Press Club last fall, after moving to Naples from California.

Here are a few of the many highlights from the Chat with Media Superstars:

How Do You Deal with a Crisis?

On Sept. 11, 2001, as all top editors flooded the Los Angeles Times newsroom and took over tasks Laura usually handled as Page One editor, she looked for ways to contribute. The newspaper had gone up 86 open pages, so she took over their organization, planning out the news flow and standing on a desk to divvy out the pages to news editors, then overseeing their layouts in makeup to get the massive newspaper into production.

In that same crisis, Bob talked about having “all hands on deck,” with a 7 to 8 minute lead story pulled together quickly as details were still evolving about the terrorist efforts, followed by 93 consecutive (yes, straight) hours of coverage. Coverage of the crisis began Tuesday morning, with the planes hitting the Twin Towers, and finally ended at noon on Saturday.

Bob also recalls working with Press Club member and WINK-News investigative reporter Rich Kolko and the FBI for a just-evolving story about an active shooter in Newtown, Connecticut. Bob got the scoop, but it certainly took an emotional toll on him and everyone involved as 26 people were killed, including 20 first graders.

What are their uplifting stories? Laura talked about the people she feels she has helped in their roles as investigative reporters. She said she is inspired watching them grow in their careers. George and his sports radio team recognized three student athletes each week. It was such an honor to give them the limelight, inspiring them to achieve even more.

Media stories can also help bring closure to families. Bob recalled reporting on a story that dragged on for four years. After TWA Flight 800 crashed in 1996, families of the victims wanted – needed – to know why the crash occurred on the Boeing 747. Some evidence pointed to a possible missile strike or a bombing. But, an exhaustive investigation revealed a fuel tank explosion. Those findings forced the aviation industry to implement numerous operation safety changes.

Panelists and audience members talked about major threats to journalism, including pressure to do more with less, news being reported round the clock, carrying cell phones that are always on, hard to break stories, “performances” vs. real journalism, sacrificing accuracy and context. Other threats: news consumers who support their views, not balance. Executives of large media outlets, radio and broadcast, don’t have a journalism background. Audiences listen to what they want to listen to—what they agree with. That is why local news is so important; it gives us balance. In response to a question about the dismantling of newsrooms, Laura suggested she’s looking at the silver lining. Local media has been pressed to go back to its roots, to serve as a watchdog and to go deep into important stories even as news teams are contracting.

George commented that it can be an exciting business to get into; it gets into your blood. But it’s not a “bed of roses.” Due to decades of mergers and acquisitions in broadcast and print, journalists are responsible every day to do more with less.

The concern about the veracity of news, the claims of misinformation have been frequent and loud. Laura agreed that transparency and integrity are critical. Bob said he believes local news is more important than national, more trusted, an important resource to protect our citizens.

How much do reporters challenge their sources? There is such pressure to do stories that it seems the intelligent, well-thought-out questions are missing. We need the watchdogs. Also, sources need to trust you.

Laura said she sees different levels of skills and “hunger” among reporters. She encourages her team of journalists to push sources, including medical examiners for COVID deaths, and loves to see their tenacity. Under her leadership, reporters on COVID stories from 23 locations across Florida are now working together.

Bob raised this question: How can we get the consumer to watch multiple types of news programs, to see and hear different viewpoints? We need people to be curious, get away from their bias and complaining that everything they don’t agree with is fake news.

Press Club Board Member Tom Marquardt, retired editor of the Capital Gazette in Annapolis, and others discussed the risk of physical injury to reporters. Politics of division is a dangerous game. The current president described media as “enemies of the people” and certainly he was making a rhetorical point. Words do matter and this type of rhetoric is isolating. It can increase the possibility of violence. We were reminded, however, that every U.S. President has had issues with the media and, as an example, President Obama waged a legal and technical war on the press.

Journalists should not express opinions. They need to show behaviors that demonstrate impartiality and an element of respect for the role they play in finding and reporting news.

Press Club member Jay Newman, recently retired general manager at WJZ-TV (CBS) in Baltimore, talked about the role of editors and producers to make sure reporters do their jobs. He and others talked about how leaders were adept at driving “performance” but not actually being journalists. Perhaps there is too much oversight, with the emphasis on speed, not accuracy. Locally, we see many young, entry level journalists getting into the broadcast field, cutting their teeth, developing a portfolio and moving on to a bigger market.

Before closing the session, Rich Kolko expressed concern about PR and PIO types circumventing the news stations using social media when they want to control the story or its timing. It has become frustrating that the relationships with the news outlets sometimes aren’t valued.

Final advice from our media superstars: Journalists must stay away from sensationalism and opinions. Give us the facts. Be fair and impartial. We can come to our own conclusions. And, trust your audiences to make their own decisions.