Member Musings features the reflections and thoughts of a Press Club member. If you missed Part I of this article, visit this page.

The End is Near

Today is February 3. Tomorrow marks six months since a water pipe burst in my house, sending a flood of water throughout every room, while I was away for several hours. Yes, August 4, 2019, will remain, for me, a day that will live in infamy.

I’ve already chronicled the initial clean-up of the damaged flooring, baseboards, drywall, and furnishings mere hours after the flood was discovered. Things started out well, giving me hope that this disaster would be behind me within a few weeks.

I may have moaned about the delay in getting the insurance adjuster to make his inspection and submit his report: he showed up 10 days after the flood and took another 10 days to get his report to the adjustment desk.

I may have expressed my dismay about the $30,000 difference between what my contractor (who came out the day after the flood) estimated as repair expense and what the insurance adjuster claimed it could be.

I may have griped about not being able to utilize my cat sitter to come to my house (now unlivable) during my three weeks of planned vacation and, instead, needing to board my cats at the vet’s for a staggering $880. 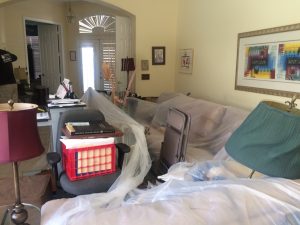 One day after the flood: Furnishings pulled to center of room so baseboards could be yanked out.

I may have railed against the $11,000+ bill for my three months in a hotel suite, only $5,000 of which my insurance policy covered.

Once the contractors got the go-ahead from my landlord, repairs went smoothly. Sort of. First, the entire house had to be re-piped, a task requiring the removal of large chunks of drywall anywhere water pipes existed. Wouldn’t you know that my younger cat Oliver, known for his cheetah-like speed and leaping skills, discovered one of the openings and made his way into the attic—and refused to come out. One of my contractors graciously—and courageously—made his way from the attic access in the front of the house all the way to the farthest reaches of the attic to retrieve Oliver. Picture him cradling my wayward kitty like a football while he crawled (remember—this is attic, so no floor, just 2 x 4’s) about 70 feet. He’s going to get a fine meal at the restaurant of his choice as my thank-you for this above-and-beyond job.

Immediately, a crew of six drywall installers rushed in to close all openings before Oliver could do it again. 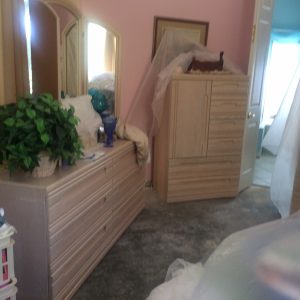 Bedroom floor down to slab after removal of saturated hardwood. A couple days later, a furniture repair service took all the bedroom furnishings away – for 5 1/2 months. I really missed some of the stuff they packed up out of those bedroom pieces & took to storage.

My contractors focused laser-like attention on making my bedroom and bath livable so I could check out of the hotel. That meant laying new floors—engineered vinyl—in my bedroom and closet, painting both rooms, installing new baseboards, resetting the toilet and hooking up a temporary sink so I didn’t have to brush teeth in the shower. That will result in another fine meal in a restaurant of their choice. On me.

Now that painting and woodwork have been completed throughout the house, we wait only for the installation of new cabinets in kitchen and baths. Yes, I still don’t have a usable kitchen; all items out of my cabinets languish in boxes in my garage, gathering grime. Cabinets were supposed to arrive “first week of January.” Then “second week for sure.” Latest word: they’ll be delivered Wednesday—two days from today. February 5. The plumber will hook up the dishwasher, along with sinks in kitchen and both bathrooms. With luck, the carefully retained countertops will fit and won’t break. And we’ll be done.

Except, of course, for all the filth—mud from repairs where the original pipe burst 18 inches below ground, drywall mud, caulking, paint—that a post-construction cleaning company will have to remove.

Then I’ll call the company that cleaned my area rugs and have them returned and my furniture reset on them. Finally, I’ll schedule a pressure washing of all my property’s exterior surfaces. I’ll feel as if I’m living in a new house!

It could have been worse.

But I’m not sure how.