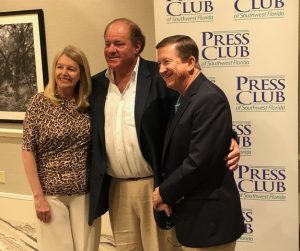 To the appreciative audience of sport enthusiasts, Chris Berman delivered ESPN stories that covered everything from the early days of cable television to the creation of new subscription streaming programs. Confessing he had been a history major who enjoys the subject, he easily recalled the names of sports figures for the last 40 years while weaving entertaining stories about sports events and broadcasts. At the “Brunch with Boomer” event at The Ritz-Carlton Golf Resort, Berman was gracious, providing photo opportunities and autographs to members and guests.

Berman became an anchor for SportsCenter on ESPN in 1979, joining a month after its initial launch, and subsequently hosted the network’s NFL Countdown program from 1985 to 2016. He is best known for his catch phrases and player nicknames. 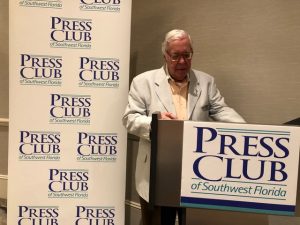 Berman appears in Adam Sandler’s 1998 comedy, “The Waterboy” and in “The Longest Yard” in 2005. He also had roles and cameos in several other movies. He has received numerous sports broadcasting awards and even received his own star on the Hollywood Walk of Fame in 2010. 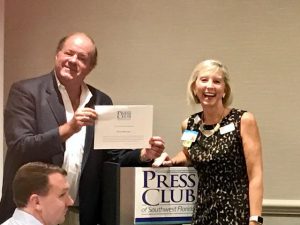 This special event represents the second of the “Pop-Up Newsmaker” programs which help achieve strategies in the Press Club’s long-term plans to become more relevant to working journalists and media, as well as to public relations and communications professionals throughout Southwest Florida. The first program in September featured the new President of NCH Healthcare System, Paul Hiltz, who had only been on the job for three weeks when he spoke at a Press Club event.