Congratulations to Pam Fultz, APR, who was selected to present a “pitch” to a media panel in a breakout session call “Pitch Tank.” Pam’s presentation about the Vi at Bentley Village “cake lady” was well received and may have garnered an opportunity for national exposure.

In an informal setting, former CBS News Correspondent Bob Orr and the first CNN Anchor Denise Le Clair Cobb will take a walk down memory lane to tell stories about their roles early in their careers (as paths crossed) and the interesting / major changes that have occurred over the years. 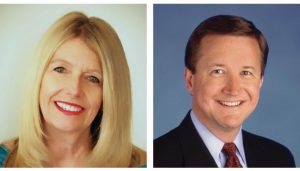 Bob Orr, the Justice and Homeland Security correspondent for CBS News, retired from the network in February 2015. He led CBS News’ coverage of most of the major stories and events of the two prior decades—from 9/11 to Sandy Hook to the killing of Osama bin Laden to the Boston Marathon bombings to the major aviation disasters such as the explosion of TWA flight 800.

Denise LeClair Cobb had a long career in television, including being an award-winning television producer, on-air talent, manager, consultant and station owner. Denise was one of the original news anchors at CNN and was chosen to anchor the premiere newscast on CNN Headline News, making her the only person to appear on both networks’ first day. After leaving CNN, she helped launch the Travel Channel and then formed her own production company.

Cost: $30 for PRSA MEMBERS, $38 Non-Members, $25 Students
Reservations must be made by Friday, Nov. 29, 2019
Hilton Naples, 5111 Tamiami Trail North, Naples
*No-shows will be billed if no prior notice given and only checks accepted at the door. NOTE: To guarantee seating and meal, reserve online and pay through PayPal by FRIDAY, Nov. 29. No cash is accepted at the door.

← Your Board in Action
Dec. 5 Annual Meeting, Celebration of Young Journalists, and Holiday Cheer! →