Have you ever tried to be humorous on a moment’s notice? I’m not talking about a hasty, sarcastic response to someone’s comment that elicits a titter or two. Most of us come up with those with little effort. No, I mean a fully developed topic with line after line of inspired prose designed to make people laugh.

More years ago than I care to think about, I fancied myself a humor columnist. I was paid to provide a newspaper column twice a month that was labeled, sometimes ambitiously, as “humor.” At that time, I was married and had several teenagers in the household—a veritable treasure trove of topics that leant themselves to humorous commentary. One or another of the teens did something predictably worthy of satirizing nearly every day. The hubby—nearly every hour. I must admit, however, that he seldom laughed at his antics as hard as I did.

One of the teens was a prankster, so retribution by other teens became a frequent fact of life. This usually took the form of “T.P.ing” every tree in our yard. Column worthy. Unusual happenings in our house that no one would admit to we labeled as actions of “the phantom.” These included: Who left the gallon of ice cream melting in the sink? Who put a dent in the garbage can so now the lid won’t fit? Who took the Scotch tape out of the drawer and put it back someplace no one would ever think to look? “The Phantom Strikes Again” became a recurrent theme in my humor columns. 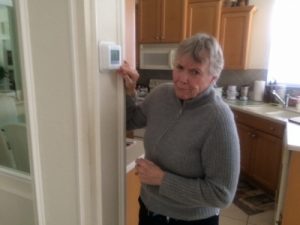 So was “The War of the Thermostat.” One of us liked it cool while others preferred the home temperature to be only slightly lower than the melting point of chocolate. The one who liked it cool began walking around the house with as little covering as possible. When the teenagers became too embarrassed to ask their friends to come home with them, the cold-loving relative smirked with that “See, I knew I’d win” expression. Then lowered the thermostat. The others took to donning sweaters.

How well I recall when a neighborhood kid playing in the house with one of our resident teens helped himself to a house key. For months—until finally we asked the police to investigate—we’d miss random, seldom-used items whose absence we couldn’t blame on the phantom. To name a few: a tape recorder, the top tier of a daughter’s wedding cake saved in the freezer for her first anniversary, a sterling silver gravy ladle, an almost full bottle of bourbon, a couple pounds of bacon, and half a gallon of apple cider. Nothing, by itself, amounted to a major theft, but together they added up to thousands! Ripe topic for several humor columns—but I could never write even one of them if I wanted to maintain speaking relations with the parents of the kid who ultimately confessed. I’ve moved many times since then, so now maybe I could—or perhaps I just did.

When this morning I thought about writing a humorous article for this month’s SCOOP, no topic came to mind. So I wrote this—a recap of former inspirations. Tell me if you liked any of them and I’ll work up something that might produce a guffaw. Okay, I’ll settle for a giggle.