The fifth NPC/FGCU panel presentation, on Thursday, March 15, 2018, featured panelists who are both editors and freelance writers. NPC member David Silverberg again served as the moderator.

The six panelists were:

Marqueeta Curtis-Haynes, a new NPC member who recently moved to Naples and formerly was a CBS News award-winning broadcast news writer/producer in NYC. She currently has a blog: Ageless Glamour Girls and is a freelance writer.

Kelly Jane Farrell, Managing Editor of eBella Magazine, was a reporter with the Naples Daily News for more than 10 years and has extensive experience as a freelance writer and editor.

Dayna Harpster, a writer and editor for the Times-Picayune, New Orleans, The News-Press, Fort Myers, and Expressions magazine, WGCU Public Media. She also is a freelance writer.

Artis Henderson, an author and a freelance writer who regularly writes for The News-Press and Gulfshore Life. Her work has appeared in the New York Times and Reader’s Digest, and her first book, a memoir, was a New York Times Editor’s Choice.

Annabelle Tometich Martin, a Fort Myers native, who writes about food and restaurants for the Fort Myers News-Press and USA TODAY Network.

Glenn Miller, formerly a staff writer for The News-Press, became a freelance writer in 2012. His byline has appeared in Florida Weekly, Gulfshore Life and Gulfshore Business. He has published one novel and is working on a second. He’s an instructor in the FGCU journalism program, and he also has a blog: glennrmillerwrites.wordpress.com. 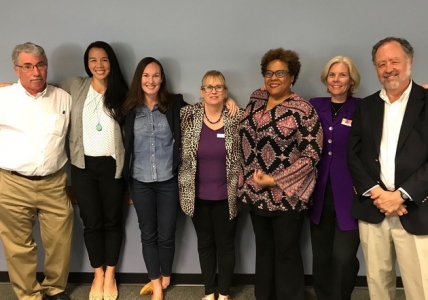 The low attendance by the students was very disappointing! The FGCU Journalism professors notified their students with emails about the panel, in addition to bringing it up in class. They don’t know why more students were not there. Perhaps some students don’t understand what “freelance writing” is or why it might pertain to them. That week was also “mid-term week,” which probably wasn’t the best choice of dates for the panel.

For this panel, the attendees were given “feedback” forms to fill out before they left, and those that attended were very positive. They also felt that more students should have been there to hear six professionals giving tips about something that could benefit the students’ careers in journalism.