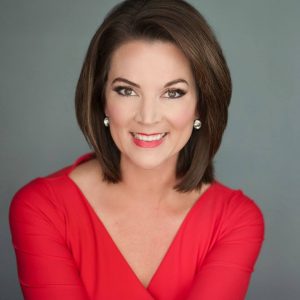 Speakers Angelina Spencer and Keith Cramsey shared survivor stories, talked about recent investigations, described the arrests of traffickers, and explained what we can do to help solve the problem.

Spencer is a partner with Empowerment Enterprises, Inc., an organization that works with many sectors on anti-human trafficking training programs. Keith Cramsey, a Special Agent with U.S. ICE (Immigration and Customs Enforcement) Homeland Security Investigations, works as a senior criminal investigator focusing on human trafficking.

Spencer started with a powerful true story about “Emily,” a single mom who turned to exotic dancing with the promise of making life-changing money with no experience. She was approached by a prominent businessman under the guise of doing private parties. She was gang raped, brutalized, given STDs and held captive in the sex trafficking industry. Emily lost everything, including her child. Spencer believes “A bad decision is not an excuse to be brutalized.”

“No one gets rescued,” according to Spencer. She says you can get the victims out of their situations, but they are not easily restored. It takes more than a weekend in a shelter. Victims must work through PTSD and, many times, substance abuse as well. “We have to empower victims, to participate in a plan to get the victim ready to testify against a trafficker,” Spencer says. “They are scared; they run again and again. But there are success stories.”

The U.S is the second largest destination of human-trafficking victims, and it’s not strictly a strip club or massage parlor problem. It is happening in our churches, farms, gated communities, seasonal housing, schools, and more. So many tactics are used. In one case a group of students from “good homes” with “nice families” found themselves at a party where they were given spiked drinks and unknowingly were caught in compromising photos. Traffickers held the pictures and threatened to release them unless they did what the traffickers wanted.

Keith Cramsey is on the front line when the call comes in that local law enforcement departments might be dealing with a sex-trafficking or human-trafficking situation. He emphasized that each of us can help, using the mantra, “If you see something, say something.”

He drives that home with this true story. A person in Fort Myers called police saying she saw a man pulling a woman by the hair into a home. Police showed up thinking they were responding to a domestic violence case. A man answered the door and stated that no woman was there. He allowed the officers to enter the home and all they see is a room full of men. All of them denied a woman being there. A search of the back bedroom revealed a scene littered with condoms and condom wrappers. Then, in the closet, they found the woman, naked and frightened. Police quickly realized this was not a domestic violence scene. All the men in the house fled the scene during the search and evaded arrest. She then shared her story with the police.

She was a young mom in Mexico when she was approached by a woman in her small-town market. The woman offered her a job in the U.S. to make more money by cleaning houses.  She was told that she did not have to worry about getting to the U.S.—all would be taken care of.

The young woman thought about it and took the offer. After days of travel, including three days walking across the desert, she was driven to Fort Myers. She met the woman’s husband, who told her that cleaning alone would not pay off her debt to them. They told her that they would hold her immigration papers until she paid up. She was forced into sex slavery. That was seven years ago. For seven years she had been working out of the bedroom where police had found her hiding in that closet.

She is a success story. She was able to testify against the couple who brought her here, and she’s now getting the help she needs.

How can we help? Be aware. You see something? Make the call. And here are the numbers to do just that: