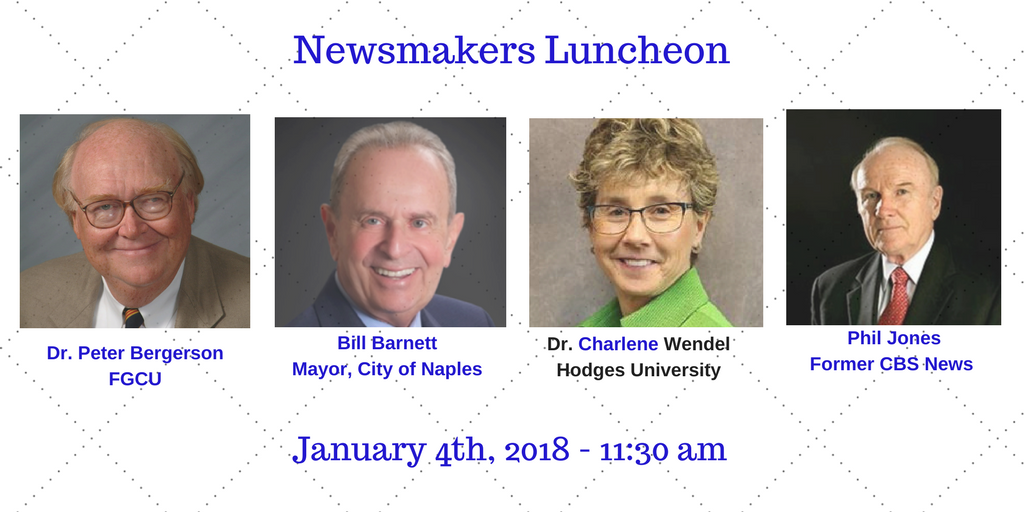 50 Years of Turmoil and Change

1968 has been called the year that changed history.  Our guests will address the events of 1968 all the way through 2017. Join us as we start the New Year taking a look at the past 50 years.

We urge you not to miss this exciting program!

Mayor Bill Barnett, affectionately known as Mayor Bill, has served 12 years on Naples City Council and another 12 years as Mayor.  Mayor Bill moved to Naples in 1973, established a car dealership, sold the business 10 years later. In 1984, when he was just 44 years old, Barnett was elected the youngest City Council member. Some of his greatest civic achievements include founding the Guardian Ad Litem program in Collier County, Mayor Bill is currently chairman of the Holocaust Museum of

Dr. Peter Bergerson, FGCU, has taught thousands of students over the last 50 years, and many of them are active in Florida politics. According to NBC 2, “He has seen the assassination of a president and the fall of the Berlin Wall, and now he’s reflecting on the current political culture.”

Dr. Charlene Wendel, a professor in the Legal Studies program at Hodges University. She is an advocate for social justice. Her professional experience includes working as a psychotherapist, a crisis intervention/suicide assessment clinician, a rape crisis center director, a lawyer, a chief executive officer of a health care organization, an instructions designer, and a college and university professor.

Phil Jones, a former CBS news correspondent for 32 years. He has reported on wars, presidents, impeachments, presidential campaigns, and political scandals of every stripe.