$47.50 – Member/Spouse – via credit card or Paypal by October 8 using online link below

$50 – Nonmember via credit card or Paypal via online link

$25 – Student/Educator – via credit card or Paypal via online link 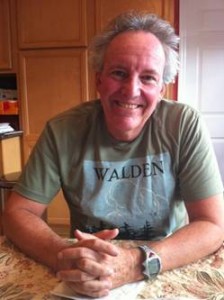 Born in 1949, Klinkenberg grew up in Miami and began exploring the Florida Keys and the Everglades as a small boy. He started working at The Miami News when he was 16 and became a journalism graduate of the University of Florida. He has worked at the South’s largest newspaper, the St. Petersburg Times, since 1977. Klink’s celebrated column is called Real Florida. He is in the UF Journalism College’s Hall of Fame.

In 2010, Klink and photographer-videographer Maurice Rivenbark won the national Sigma Delta Chi Award for the online presentation of “Real Florida.” In 2007 and 2009, the American Association of Sunday Features Editors selected a body of Klink’s work as the best in the nation. He is a two-time winner of the Paul Hansell Distinguished Journalism Award, highest honor in state journalism, given annually to the writer with the best body of work by the Florida Society of Newspaper Editors. Esquire, Outside, Travel and Leisure, and Audubon are among the magazines that have published his stories.

His latest book, which collects favorite columns, is Alligators in B-Flat, published by University Press of Florida. Other anthologies, Pilgrim in the Land of Alligators, Seasons of Real Florida and Dispatches from the Land of Flowers, are also available.

“If Jeff Klinkenberg isn’t careful, he might give journalism a good name,’’ says the author Carl Hiaasen. “He has a rare eye for marvelous detail, and an affectionate ear for those small, wise, bittersweet voices that tell the true story of Florida.’’

← Our Programs for Upcoming Months
The Newsroom Phil Built →