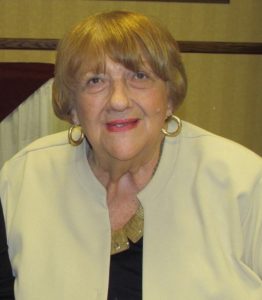 I skipped several grades and was out of college and on my way by an early age. My first job was teen coordinator at Carson Pirie Scott, a billion-dollar retail-based corporation in Chicago. Management set goals, but I had freedom to make them happen.

It was the 1950s and I reached out to Bill Veeck to do halftime shows at White Sox games. Wally Phillips of WGN reached millions, and we did shows with Ann-Margret becoming a sizzling entertainer in her senior year at New Trier High School. I had taken the first TV course offered in college and did CBS TV and NBC TV often.

The VP of Sales Promotion at Carson’s evidently had been watching my programs. Out of over 10,000 employees, Richard Schlesinger named me to establish a newly combined Publicity and Special Events Department. I had a mentor!  This was the first step toward the best job in the city of Chicago. I was 26 years old and in the midst of planning my wedding. Schlesinger believed in establishing a clear goal and letting me write the plan. I thrived on challenge and it became a dream job for both me and the corporation. 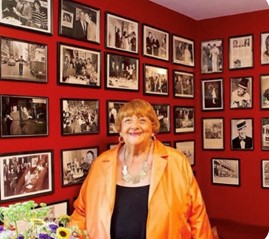 During her long career, Jo Ann Ward interacted with movers and shakers worldwide

Taking negativity for a cruise was one of my first defining moments. One of the first major events I created was Carson’s British Fortnight. I arranged for a London double-decker bus, two London taxis, a collection by the Queen’s designer Hardie Ames, two trumpeters from Her Majesty’s Household Cavalry, a goldsmith from Goldsmith’s Hall, a Bobby, a City of London 3,000-square-foot exhibit, and the entire collection of Crown Jewels in replica to be brought to Chicago.

Big Ben was waiting seven stories high at State and Madison. Five of us were on the team to Britain to purchase 10 million in merchandise, and my job was to create the sizzle to sell it. My goal was to generate 100,000 people a day for the British Fortnight, to heighten the corporate image, and to get the merchandise sold.

The double-decker bus and taxis were shipped to Calumet Harbor in Indiana. As it was Chicago’s first double-decker, the media traveled to the arrival and unloading. Horton Trautman wrote a headline story for the Chicago Daily News,” Omnibus Too Much for Us.”  The bus was 14’ 6” and our viaducts ranged from 14’ 2” up.

I had previously planned a two-day route to bring the bus downtown, but Mayor Daley had planned the Chicago’s first Venetian Night Regatta for the end of the week, and I seized on the opportunity. I called to see if we could enter the boat parade. I found a barge, decorated it, wired it for sound, and sent it to Cal Harbor. After three days of rough weather, it cleared by midnight and a sailor at the 12-mile limit reported that a London bus was passing at seven knots.

The Venetian Night Regatta was upon us, and bleachers upon bleachers were filled at the lakefront. The harbor was jam-packed with spectator boats. A large Chinese Junk rounded the bend from Navy Pier, and following it was a red double-decker bus filled with passengers in bowler hats with umbrellas as the sound system played “Hail Britannia.” Banners announced, “The British Are Coming,” and the crowd went wild.

I did get 100,000 people per day. We did sell the $10 million in merchandise, and I did win the Chicago Publicity Club Award for 53,000 lines of editorial publicity for the two-week fortnight. 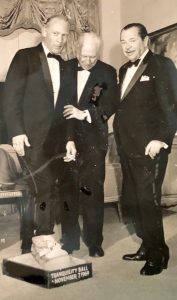 There have been many defining moments over seven decades. The 1969 moon landing was celebrated around the world with ticker tape parades. I was to produce the Chicago Gala. It took numerous contacts to NASA to acquire permission for the first official footprint after the moon landing. A press conference preceded the event with every piece of electronic and print media in the Midwest in attendance. Buzz Aldrin replicated his moon landing boot print for a bronze, and Tiffany’s created a commemorative collection in gold. At the 50th anniversary celebration several years ago, the Smithsonian chose to have the boot print as their symbol — fifty years after I had done it.

Over my lifetime, members of the press have been my most interesting and best friends. Editors, anchors, writers, and authors have worked together to create great results. I have published a magazine, done photography for magazines, written radio copy, and prepared TV interviews. Good Morning America staff, the Today Show film crew, magazine editors and dailies helped me establish community identity. Funny things over the years included a cheese head of Mike Royko that drew the attention of Peter Jennings. I once went to dinner at the White House with Hugh Sidey of Time Magazine. I have been blessed to know and work with so many remarkable people over the course of my career.

I have been fortunate enough to work with many celebrities over the course of a seven-decade long career.  I did many stories with Carol Channing and last had dinner with her in 2003. At age 83, she was decked out in sequins and about to marry Harry from her high school band. In 1960, I produced a world premiere of “The Great Imposter” with Tony Curtis for a “Salute to California” promotion. About 15 years ago Tony was here in Naples with his sixth wife. He sent me a note, “from an old flame.”

My career has given me the opportunity to fly in The Spirit of St Louis replica aircraft while sitting on a wicker seat on the floor. In 1985 I had the privilege of travelling on the Concorde from London to an air show here doing touch and go’s on the runway. I served on the International Festivals & Events Association (IFEA) Board with Jack French of the Tournament of Roses, Dan Mangeot of the Kentucky Derby, and Jo Hauck of the Indianapolis 500 Festival. I was honored to be inducted into the IFEA Hall of Fame in 1997.

I’ve been so fortunate to have had great career opportunities. Carpe Diem.

(Editor’s note: Defining Moments is a series in SCOOP to give you, our press club members, a forum for writing about highlights from your career. Please share your Defining Moments story for an upcoming edition of SCOOP by emailing your article of 800 to 1,500 words to info@pressclubswfl.org, attention SCOOP Editor Karla Wheeler.)