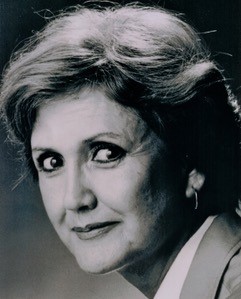 In 1979, ABC named me vice president and general manager of WXYZ-TV, making me the first woman in the U.S. to head a network-owned station, or a station in a major market. Metro-Detroit was 7th in the country with some five million TV households.

I was prepared. That is not why I got the job.

ABC needed a woman. The National Organization for Women had inspired class action suits and were talking to broadcast companies about their promotion practices.  ABC wanted to pre-empt them. In their organization, I was the only female department head in Sales, News, Programming, Finance, or Engineering in New York, Los Angeles, Chicago, or San Francisco.

An old axiom says, “Good luck is being ready when opportunity knocks.” I was ready because my predecessor – Jim Osborn – had promoted me two years earlier to be the first woman to head Programming, the station’s largest department. Because of Osborn, ABC knew about me.

I moved into the walnut-paneled office. The ceilings did not collapse. The high ratings continued.  It took a few days for the men in the Sales departments to recover. General Manager jobs were traditionally filled by general sales managers. Worse than being female, I had by-passed the system. The announcement likely caused two-martini-lunches with Pepcid as dessert. 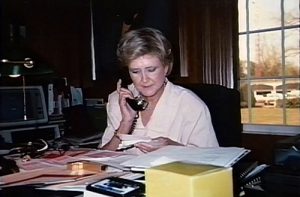 Jeanne Findlater in 1979 was the first woman to head a TV station in a major U.S. market

My femaleness was a topic. My mannish coif and tailored suits were print worthy. I was amused when a major magazine reported that General Motors CEO Mary Barra wore Christian Louboutin shoes.  Everyone knew the wardrobes of Steve Jobs and Mark Zuckerberg. Men have caught up with women.

My job changed my professional life, but it was later — under a new owner — that produced defining moments. Condoms and literacy are two.

In 1985, the minnow swallowed the whale when Capital Cities bought ABC.

FCC regulations excluded WXYZ-TV from the sale; our audience was too large to swallow. ABC sold us to Scripps Howard Broadcasting, whose many stations were managed by men. I was a bonus.  I was offered a job in New York. The family didn’t want to move. I stayed and moved from heading the smallest ABC-owned station to heading the largest of many owned by Scripps Howard. It expanded my clout.

Broadcast stations are federally licensed and must meet FCC regulations that include broadcasting content to meet community needs. For societal reasons, I said yes when I was offered contraception ads. I forgot to alert my boss in advance. He was upset. With clenched teeth, he spoke about broadcast standards. I told him that Detroit was fourth in the nation in teenage pregnancies. I offered reassurance: the condom ads would air in “safe” time periods; “They won’t get much attention.”

It was an explosion. “Talk Radio” had a field day. Network NBC and CBS ran interviews with me on their evening news. Los Angeles did a full-page story on me. The phones rang.

Other stations followed, but we were first. Broadcast standards changed. It was a defining moment. A more important defining moment was to use commercial TV to teach literacy.

In the mid-1970s, Doug Fraser, president of the United Automobile Workers, asked me to create programs to teach adults how to read. Metro-Detroit had a significant population that could not read at grade level four. Illiteracy was a problem in the factory.

It was hard to say no. The task was huge, expensive, and controversial (phonics or rote.)  I had no clout to make it happen.

That changed in 1986, when ABC and Scripps were focusing on literacy. Don Perris, the president, told me he wanted something spectacular. There was Doug’s idea and my ability to say yes. Timing is everything.

WXYZ-TV created a series of 30 lessons for adults. They aired daily at five a.m. for the shift arriving home, and again at 10 a.m. The 30-second ads of four sponsors talked only about the value of reading. We offered it free to ABC stations in 200 markets. Later, Kentucky Educational Television syndicated it to public stations and to prisons. In 2000, a demographer figured it had been seen by 18 million people.

I  never wanted to be measured by being “first.” I wanted to do the job well to show the wheels won’t fall off the car when a woman is in the driver’s seat.

Jeanne Findlater, a Founding Member of the Press Club of Southwest Florida (formerly the Naples Press Club) was Vice President and General Manager of WXYZ-TV (1979-1987; a producer of local and syndicated shows that included Lou Gordon and Hot Seat (WKBD-TV); Assistant Editor of Detroit Magazine/Detroit Free Press; and a Special Education teacher in Detroit public schools.

[Editor’s note: Defining Moments is a series in SCOOP to give you, our press club members, a forum for writing about highlights from your career. Please share your Defining Moments story for an upcoming edition of SCOOP by emailing your article of 600 to 1,200 words to info@pressclubswfl.org, attention SCOOP Editor Karla Wheeler.]